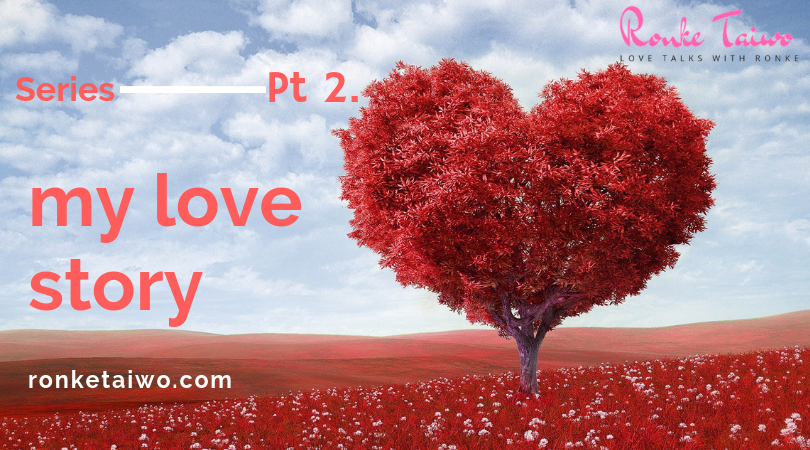 Yes…. Did I say I called it quits totally. Yes I did with the help of God, and you can trust the devil he continually whispered words of doubt telling me not to loose the guy that seems to love me so much, and to make matters worse, he was still hanging around, but I remained resolute and stood my ground.

At that time I had plans to travel to America for further studies but I felt in my spirit that that was not the step for me to take. God showed himself strong and I got a good job with one of the best banks in Nigeria (though I’ve left the bank now. They are still on top of their game).
My getting the job truncated all my plans for going for my masters and positioned me to meet him. Yes back to our gist.
God sent someone to me exactly eight months after the break up but he didn’t look like what I wanted because of all the reasons outlined below.

After we met, we became good friends and would chat on phone from time to time. I just realized I kept on looking forward to his call. Three months later, he came to propose to me and he let me know he was ready to get married in the next one year and very serious about it. I became confused because shortly before he came there was also another brother who had approached me, he seemed more playful and settled (financially), but my spirit kept saying no (and I’m glad I Obeyed, if not……, gist for another day.)
Yes, he stayed with his brother while he was in Lagos and he kept courting me with a vengeance. He had informed my Pastor of his plans and my Pastor just seemed to fall head over heels in love with him. My mum and my friends (the Christian ones) seemed to love him too. I argued with God based on the fact that he was not what I wanted, but God let me know he was who I needed.
The first set of gifts he gave me was so symbolic to what God was telling me. As at that time I needed a sunshades (cos of the sun), a wallet, and something else (which I will not disclose) and he presented all these things to me, even though I never told him I needed it (isn’t God great). As I looked at the gifts, I really appreciated them, though they were not too expensive, It was exactly what I needed. I kept on praying but as the days went bye I started liking him more and more.
It was 2ndof January 2009 that he popped the question again and I said yes. After I said yes, I wondered if I spoke the words or they flew out, but apart from accepting Jesus as my Lord and Saviour, it seemed to be the best decision I have ever made. Dec 12, that same year we got married and almost three years after I could say God gave me a good gift in him and I wondered what would have become of me if I had followed my flesh.
After marrying him, my life changed for the better and it keeps on getting better. He always encouraged me to take any step I’m scared of taking.  I have a podium to talk to a lot of people because I married him. I’m growing spiritually everyday just because I married him. All my earlier fears were unfounded and we have an interesting marriage.

In any situation always wait on God, and he will grant you the desires of your heart (even those you might not know). You know what you want but God knows what you need.

MARRIAGE SHOULD NOT KILL YOU