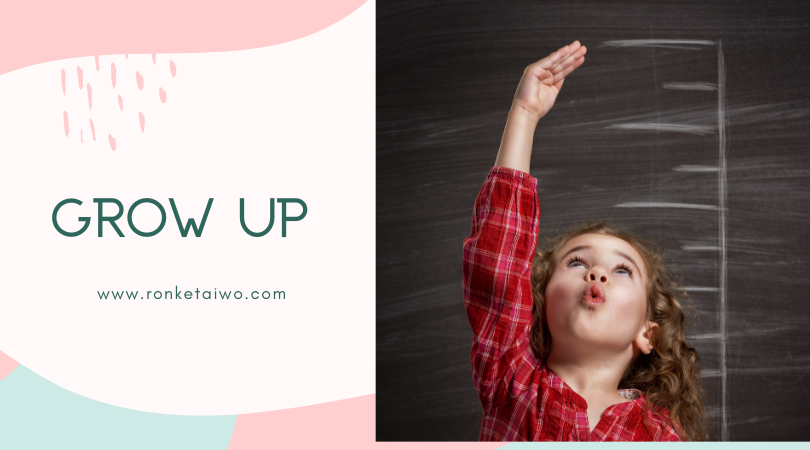 When I was young and would pee on the bed, I sometimes used to dream that I was in the toilet and I peed in the toilet bowl, by the time I wake up I would realise I had peed on the bed. I don’t know if this ever happened to anyone else. From the time I was around 4 or 5 I stopped peeing on the bed cos I had grown.

Recently I had the same dream. Apparently, I was so pressed and too tired to stand up from my bed. So, in the dream, I got to the toilet and sat down, but the pee refused to come out. I was alarmed in the dream. I felt I had caught a disease that is stopping me from emptying my bladder. That frustration made me wake up in real life and I realised I was pressed, so I grudgingly woke up and went to the toilet and did my business.

So God used this situation to teach me a lot of things and I realized how important it was for us to grow. When we grow, the same temptation or happening that would have fazed us otherwise would not affect us. The exact same dream that would have made me pee on the bed as a young child could not make me do that now because I had grown. My senses of responsibility have grown even subconsciously that even my bladder could not misbehave even though it tried.

In the same was when we grow emotionally and intellectually what used to confuse us will not anymore. When my first son was two years, he couldn’t write anything except the number 1. I was legit worried then because a couple of his classmates could, it is now that I am in Canada, I know that a 2-year-old does not have any business writing. In Nigeria as soon as your child clocks 2 the teachers start teaching them how to write😀, but I digress. My husband told me to leave it that when he grows, he would be able to (If you know my husband, nothing bothers him. His faith is something else. It is only when I was in labour during the birth of 3 of my kids that I saw him flustered)😢. As soon as he clocked three, within a week he could write 0 to 9 (I believe you know 0 to 9 are all the numbers in the world. Other numbers are a combination of them). The rate with which he learned was alarming. I attributed his learning fast to the support and love his new teacher in that class showed him (that teacher was amazing ) but I also knew it was because he grew physically. His brain was better able to understand and replicate what he was taught.

When we grow spiritually too, unconsciously, good virtues in us will grow and the bad virtues we possess will go down. You will just realize that what your spouse will do that would normally get you so angry will not move you again. People will annoy you and you will smile. In fact, some of us will go ahead to say, “If you had met the Ronke I was before, you would have been served.😡” We just notice that spiritual things that didn’t use to make sense to us start making sense.

So how do we grow spiritually, For some of us the Holy Spirit does a fast work and we grasp a lot of spiritual things within a short time but for majority of us , the growth happens the same way our physical growth happens, we don’t know how we grow until we see our clothes shrinking. I bought a pyjama for my second son Ife which was his exact size and six moths later it had become a threequarters trouser and the top a jumper😆. It showed he had grown a lot taller within that 6 months, but I and hubby never noticed. Even though we didn’t notice, he was growing.

For a lot of kids, as long as they eat, drink and exercise their body they would grow. I used to think it was only eating and drinking that made people grow, until I noticed that if a part of a body is not in use due to sickness, it shrinks. Even seniors who can’t exercise again because of their waning strength seems to shrink. So as Christians we need to eat the word of God, drink prayer, and exercise by acting out all we have ingested. If you keep eating without exercising you become too obese. To be healthy we need to practice all we are learning. They taught you In church to love, get home and show love to someone close to you. Put all you have learnt into practice and you will grow.

I am not against deliverance, neither am I against counselling, anger management classes, emotional intelligence lectures, I am vast in all these fields. I preach them in churches. I do deliverance sessions and achieve success in a lot of cases as a Minister of God, but much more than ever, I know the importance of spiritual growth. As you could be delivered today and still with your leg walk back to your vomit if you refused to grow.

A pastor friend of my prayed for healing for a man who had HIV and the man was healed, He went to the doctors and was confirmed Negative, but this same man was used to sleeping around without protection. So he continued and guess what, he was back to the Pastors office because this time he had syphilis and some other STDs. God healed him the first time around but he didn’t grow enough to walk away from what caused his disease .

So you went to or are going to church today. Some of you are even getting weary because you feel you have not changed. Please don’t be like my son who wanted to know exactly when God adds height to his frame, lols,🤓😁😁😁😁I told him it is most likely in the middle of the night. You just keep eating, drinking, and exercising and if you don’t stop one day you will notice that you have outgrown your pyjamas.