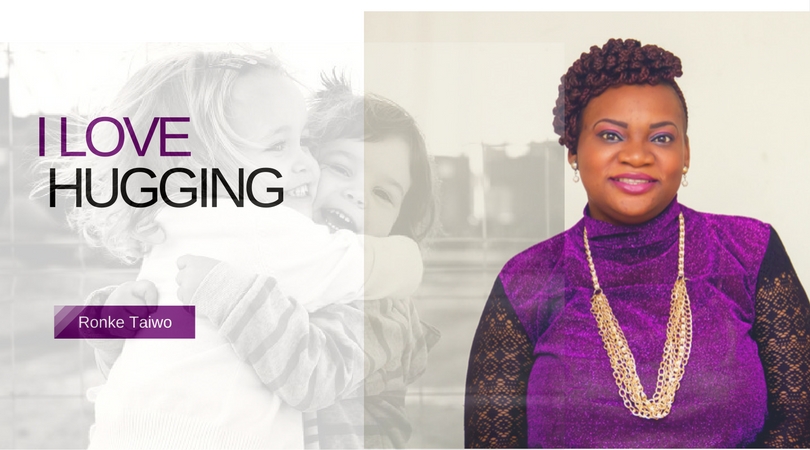 HUGGER RONKE.
I love hugging. I am naturally a toucher. I used to touch people when talking to them but now I have stopped, probably due to maturity. I am a visual and kinesthetic learner than I am auditory. I tie learning to my feelings. Maybe that is why I am also an emotional teacher. I would always use examples that involves the people I’m talking. I would want to move close to my audience so that they can “feel” me. But lets go to why I am writing this.
So when I was young, I used to love hugging. Anybody who holds me or hugs me I believed loved me more and it was a way I showed solidarity, love and care to people. As I grew I reduced the hugs because it was weird to some people (Nigerians) so I most times held back.  When I seriously started praying for who I was going to marry. One of the things on the top of my list was that the person must be a good Hugger. Can you imagine that? Sometimes while praying that way I would tell myself there was no way God would take me serious. Why should I ask for someone who can hug amidst other important things?

In comes future hubby into my life and the first thing I noticed about him was he was a toucher. When we would talk and he had an important point he wanted to pass across to me. He would move closer to me or hold my hand. In fact there was a day we were on a stroll and I said something funny, impulsively he put his arms around my shoulder and it was a shock to me(we were just friends), not because of anything but because my husband was a spiri koko. So I didn’t expect him to do that. The day I said Yes to him, the first thing he did was to hug me and I wondered why he was like that.

Some dates later while we were writing down the rules of our relationship. He wrote down No kissing before marriage and I agreed and when I asked him what about hugging. He said no we were going to hug. When I asked why, he said he was mature enough to handle a hug and God had prepared him that it was going to be a hugging relationship. I looked at him as if he was from another planet. So he told me the first revelation he got about me was that both of us were hugging (told you he is a spiri) and that he woke up wondering if the revelation was from the devil, but that he got a confirmation that it was from God and the revelation prepared him and let him know the relationship will be hugful, lol.
I got home that day and I cried. I cried because God cared so much about my little request I asked about wanting someone that could hug me. He cared so much that he went to tell hubby that he should hug me. So that was how we had a hug-full relationship. God helped us to stay on hugging. We never kissed until our wedding day and today we are still hugging today.
Why did I write this. I wrote to let you know that God cares about the minutest desire in our heart so far its genuine. So don’t think there is something too sacred or unserious that you can’t tell God. And h does not just answer our prayers. H does it good measure, pressed down, shaken together and running over. I asked God for a hugger, he gave me a mega hugger (my husband can win award for hugging). God loves me that much and He loves you that much too. I am giving him a big hug
So this morning I woke up with an appreciative heart and I am giving out free virtual hugs to everyone who can catch it. Take your hug
With Love,

LISTEN TO THE REAL YOU